Mallard breeds can be somewhat confusing.

They can be larger than normal or much smaller, darker or lighter, all white or all black. Watch for the little curled feathers on the back of the male, above the tail. Only the Mallard and its domestic descendants have those. Well, the Hawaiian Duck does too, but the chances of seeing one of those around here is about zero.

Again, lots of white is often involved, including all-white breeds like the popular Pekin Duck.

Another common form is the bibbed version. It has a sort of normal body and head plumage, and a white chest. Other forms and crosses can have spots of white just about anywhere. Usually these white spots are not symmetrical across both sides, and that asymmetry should tip you off to think domestic influence. The passion for weird plumage in domestic ducks does not stop with white, but can go the other way too.

Some breeds are darker than normal Mallard plumage. This duck is dark all over and rather iridescent, like its shiny speculum feathers got spread over the entire bird. Very handsome, indeed. Just be aware that very odd things exist in the world of domestic poultry, and oddity should make you consider domestic origin. Body size can often be a clue toward domesticity. The first breeds of domestic Mallard were bred for food, and consequently for large body size. A domestic duck can be twice the size of a wild Mallard. 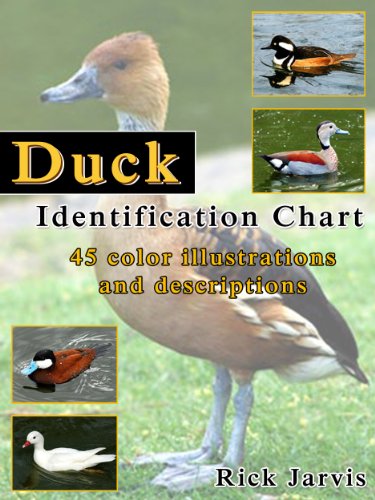 But, domestics can be smaller than normal too. Indian runner ducks are long and lean. These are very odd, tall, skinny ducks that look like bowling pins. They are great egg producers but have totally tubular bodies. Call ducks are tiny, teal-sized things that have smaller bills and more rounded heads than normal ducks.

They can have normal Mallard plumage, white, faded, or dark. Males will still have the curled tail feathers and the plumage will generally fit in the same basic categories as the other Mallard types. This dusky call duck was in Union Springs, Cayuga Co. Ducks are good fliers, and some fly long distances in migration.

That means sometimes we get European or Asian ducks turning up in North America. Such an occurrence is pretty rare, though, and the few species that do this are generally illustrated in the field guides. Keeping ornamental waterfowl is very popular. It can be surprising how many people have captive ducks and geese.


Sometimes these ducks get loose, and sometimes their owners get rid of them by turning them out on a pond or lake. The best local examples of this phenomenon are the Mandarin Duck pair that was at Myers Point, Lansing, NY briefly in January , and the Red-crested Pochards and hybrid that put in an appearance there many years ago.

One mark that seems to show up more frequently is pinioning, where the tip of one wing is surgically removed to keep the bird from flying. When pinioned ducks flap, you can see the half-a-wing pretty clearly as was the case with the aforementioned pochards. A number of guides to all of the ducks of the world are available, so a quick browse through one of them might find your odd duck. If not, try one of the other possibilities. Male ducks provide no parental care, and female ducks do not have to feed their young, just lead them around.

Which is why male ducks can get away with not helping. This situation can lead to careless sex and consequently hybridization. Although hybrid ducks are not that common overall, they do occur on a regular basis. It turns out that most females of the Mallard close relatives find a green head really sexy, and they will hook up with Mallard males whenever they are available. Such propensities create some conservation concern when domestic Mallards are introduced into the range of some other species, such as American Black Duck or Mottled Duck.

Note that one has the curly upper tail coverts like a Mallard and the other one does not. Sometimes the hybrid pairs are between species that are not closely related, such as Hooded Merganser X Common Goldeneye. Frank helped establish the California Condor Breeding Program and a captive breeding program for the threatened Harpy Eagle in the early s and was deeply involved in the discovery of the cause of egg-shell thinning and population decline in the of the California Brown Pelican in the s. While there, he created the Penguin Encounter for housing, caring for, displaying and breeding several species of penguins including Adelie and Emperor Penguins.

He also succeeded in propagating a number of waterfowl and other species at SeaWorld and advised numerous zoos and institutions around the world on captive propagation of waterfowl. Frank spent almost 50 seasons in the Antarctic, Subantarctic, and the high Arctic, educating tens of thousands of tourists and friends about wildlife and the need for vigilant conservation and biological research. He was awarded the Polar Medal by the U. He lived and worked out of San Diego until his death on 8 December This substantial tome was the most complete photographic presentation of the waterfowl of the world at that time, with color photographs showing virtually every species and subspecies of ducks, geese, and swans in the world.

Over the ensuing years, he continued to travel and photograph waterfowl male and female, from downy young to adults, on the water and in flight. This identification guide devotes two or more full pages to each species with color photographs of 20 or more individuals. A color range map of North American species shows seasonal range from Alaska to Panama. Range maps are also provided for accidentals and vagrants from other parts of the world.

Text is limited to providing length, wingspan, and weight plus a brief description of each species.

The color photos are of high quality and because of the digital format can be optimally arranged on the page. A short introduction is provided for each group of waterfowl.